Selecting the best oscilloscope for your application

Anyone who ever laid hands on a Red Pitaya unit knows why it’s called the “Swiss army knife” board. They’re about as versatile as they come, good for electronic engineers, teachers, students, or hobbyists for their every-day use, small enough to be carried around easily, yet powerful and with excellent value for your money. Especially now that the range has been extended with the SIGNALlab 250-12 unit, sampling at twice the frequency of the traditional STEMlab boards, with improved performance and full software control. Nobody claims it to be the best instrument for specific applications, but the same can be said about the famous tool that was born in the Alps: would a master butcher use it to carve up the finest delicatessen meat cuts, or a car mechanic uses its built-in screwdriver in his workshop? Probably not. But that’s not what it was designed for, and the same goes for Red Pitaya

When it comes to the applications that come with the board, the same argument can be used. The most commonly used applications are developed in-house by Red Pitaya as a complete package for a virtual instrument, but the open-source software allows users to customize them or write entirely new ones from scratch for specific FPGA projects. One of these standard applications is the traditional oscilloscope, including a built-in signal generator.

Now, is Red Pitaya the best oscilloscope for your application? Maintenance engineers on an oil rig or telecommunications engineers, working on high-end projects in the GHz range, can stop reading here. The instruments they need are playing in a different league, but one that probably carries ore or two more digits in its price tag. But when dealing with mid-range applications, the Red Pitayas stand their ground, and more than that (see the developer guide here).

The reference gives it away, the new SIGNALlab 250-12 has a 250 MSps sampling rate @12 bits on both analog input channels. The 125 MSps @10 or 14 bits of the STEMlab 125 models already gave customers quite a run for their money, but this really cranks it up. The 60 MHz oscilloscope bandwidth has been left untouched with respect to the STEMlab 125-14 model, but the increased sampling rate allows a higher definition and more precise analysis of the signal, especially in the upper half of the measurement range. The vertical resolution is also far greater than the typical 8-9 bits you would find on standard, more expensive, digital oscilloscopes. The RF outputs, which can be used as a signal generator, have the same sampling rate, ADC resolution, and bandwidth as the inputs. Similar boards from competitors will provide significantly lower performance: either they can be used exclusively as an oscilloscope, or they offer only inputs and no outputs, or they sample at much lower rates.

To use your Red Pitaya board as a full-grown oscilloscope, some peripheral accessories will be necessary. Whereas for the STEMlab 125 models, different kits (including protection cases) are available to solve this problem, the SIGNALlab 250-12 standard version already comes with oscilloscope probes in the box. The housing of this built-in board also provides it with basic protection against environmental conditions, which can also be a factor whenever it´s necessary to take the Red Pitaya outside the lab.

Of course, when comparing the naked Red Pitaya board with a complete oscilloscope, the lack of physical buttons can give the impression they are much more complicated to handle. Nothing further from the truth.

Setting up the board is done in a few straightforward steps (explained here) and the layout of the web-based interface (which is running on your PC or tablet using any standard browser, although Google Chrome is recommended) is as intuitive and user-friendly as any classic oscilloscope, with simple settings for triggers, horizontal and vertical interval measurement, autoscale, etc. Besides the on-screen measurement and analysis, test data can either be transferred via an Ethernet connection or WiFi network or stored on a separate micro-SD card (up to 32GB) for subsequent transfer and post-processing. This analysis can be done using standard software packages. Supported features and available applications include Test & Measurement functions such as the Oscilloscope, Signal Generator, LCR meter, Logic analyzer, and many more, including SDR. SCPI server enables control from Labview, Python, and Matlab, while C API is available as well.

A typical community for the STEMlab Red Pitaya models are engineering students and teachers. Not just because their budgets are so tight they always have to live off scraps from companies or low-range instruments – as was often the case in the past – but since now, these boards offer affordable hardware with an unlimited spectrum of applications for their academic process, helping them understand all the different layers of the system, both hardware, and software. When it comes to the scope application, they´re probably the users who will exploit its widest span of features when studying electronic circuits, power system analysis, serial data analysis, etc. The SDRlab model is most popular in the industry and the ham radio community, due to its SDR performance, while the SIGNALlab unit is mostly suited for industrial applications.

Difficult to find a better-suited component for a wider public. Its affordable price and versatility turn the Red Pitaya power tool into the best choice for professional engineers, teachers, students, and other enthusiasts. Fair enough, there are better oscilloscopes if your budget is big enough. And surely the same can be said about its other standard applications, such as the spectrum analyzer, network manager, logic analyzer, LCR meter or vector network analyzer. But try to put all these instruments in your pocket. With Red Pitaya, you get all-in-one. Job completed? No problem, just store it carefully in your drawer, but not too far. You´ll probably need it again sooner than you think. 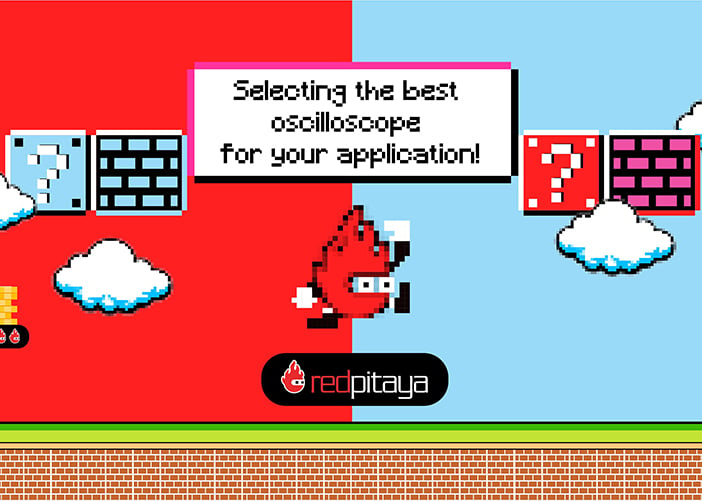