Nothing was easier than taking the protoboard and mounting one of the old golden resistors as a shunt to and test … some ‘piezos’ (ultrasonic piezo transducers). The ‘piezos’ that we used as a DUT (device under test) were exactly the same ones which we used earlier in the previous two updates:

It is very straightforward – connections are as shown in the instructions.

We set the shunt resistor value, selected the frequency fairly broadly, and then increased the number of steps (10 step resolution is not really representative).

As expected the impedance (Z) characteristics were not even close to similar for the two transducers. After all, they are not equal in geometry. What they have in common is the first peak at about 40 kHz – which reflected in almost all parameters plots also. Here we could have been smart about serial capacitance and parallel inductance, but we leave the interpretation to you.

Another interesting point we tried as well: a mechanical load was applied – a plate was placed in the acoustic field at a distance »d« in front of the transducer.

It was quickly observed how the impedance curve changed near the first natural frequency – due to reflections and partly standing wave formation it became sharper. It may be nice to see the 3D plot, but we did not investigate further.

Now this is what one gets with ultrasound. Now imagine how the impedance of an ordinary speaker or perhaps of a X-mas card buzzer is measured (audio frequencies!). Would you happen to know how »Oui?« is pronounced in French? Try this audio measurement yourself. And do not forget – enjoy!

This is it. So long Red Pitaya and thanks…
Newer Physical System Modelling
Back to list
Older Extension module compatible vith Grove modules from Seeed
close 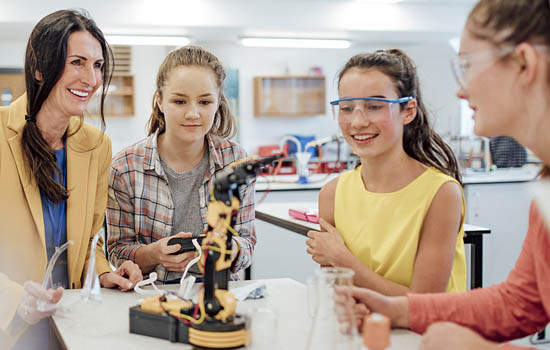 Usually the first thing girls interested in STEM fields notice is that it is a male dominated world. It is probably because of how we raise our kids, depending on their gender....

Red Pitaya as a PID controller

A proportional-integral-derivative controller is a control loop mechanism often used in industrial control systems where continuous control is needed. The easiest way to...