The Red Pitaya STEMlab units are renowned for their suitability for low-budget RF applications, and ideal for educational purposes. However, the requirements for additional peripheral equipment, test instruments and assembly tools often make projects much more costly, exceeding the limited educational budgets. To address this , Markus Gardhill and Tushar Tandon have developed a radar system using affordable, commercial off-the-shelf (COTS) components, easy to assemble and connect, with built-in monitoring features. Two STEMlab 125-14 units are the cornerstone of this design, providing high flexibility and a great performance/cost-ratio, on top of the simple design.

There are four main building blocks in this educational radar system – from the signal processing over the baseband & IF stage, to the RF frontend and antenna (see Fig. 1). All four use COTS components, including the FMCW radar frontends as a single block for the RF and ANT stages.

Figure 1 a) Top-level architecture of a radar system divided into four main building blocks with three types of interfaces and b) the hardware subsystems utilized in the radar kit.

The baseband block consists of the two Red Pitaya STEMlab 125-14 units, whose specifications provide the radar system with the high-performance processing needed for modern automotive and industrial radar systems. The particular use of this model, designed for SDR applications, enhances this even more, thanks to its 14-bit resolution. FPGA devices, such as Red Pitaya STEMlabs, have become a widespread platform for signal processing applications, with high-speed ADC and DAC, and relatively simple configuration through user-friendly software.

The RF frontend-and-antenna block is also built using COTS components at a reasonable cost, resulting in a total kit price around €300. The initial design of the radar includes InnoSenT IVS-947 and IVS-565 24 GHz frontends, both supporting bandwidths up to 250 MHz. An integrated low-noise amplifier (LNA) in the IVS-947 allows direct frontend connection to the baseband processor, without any additional circuits. This is not the case for the IVS-565 unit, where an additional LNA is required before connecting it to the STEMlab. Figure 2 shows the straightforward connection between the STEMlab and the IVS-947 frontend for two experimental setups, which will be explained llater.

Figure 2 Connections between STEMlab and IVS-947 frontend for a) chirp characterization and b) FMCW measurements.

On the other side of the baseband block we find the signal processing feature. As can be seen in Fig. 1 b), this is mainly a computer running Python, a versatile, open-source multi-platform programming language, ideal for engineering education purposes. The entire radar kit can be accessed and controlled via Jupyter notebooks. A perfectly valid alternative for the Python software would be the use of the dedicated STEMlab software, resulting in the same functionality.

The two radar experiments shown in the figure are typical exercises, allowing students to experiment with the radar kit. The first one is a chirp characterization of the frontend, where a single upsweep control voltage is generated, and the synchronous-to-control voltage generation is sampled at 15.6 MS/s. The results are shown in Fig. 3.

The second is a chirp sequence measurement system, where the STEMlab waveform generator creates a control voltage for 128 upchirps with 216 MHz bandwidth and a duration around 1 ms. Synchronous input sampling at 122 kS/s and subsequent Fourier transformation results in a range-Doppler matrix, as shown in Fig. 4.

Figure 4 Chirp-sequence measurement from a house gutter down into a garden, pointing towards a moving swing. The swing is clearly visible at a range of r ≈ 15m and a radial velocity of v ≈ -2m/s.

The particular application of this radar kit, along with the experimental examples, is just another demonstration of how helpful the Red Pitaya units can be for young engineers and their teachers when it comes to hands-on learning, without the need for numerous and costly peripheral devices. Moreover, rather than being a single-purpose device, the versatility of the units allows the user to integrate STEMlabs in countless other experiments and devices. 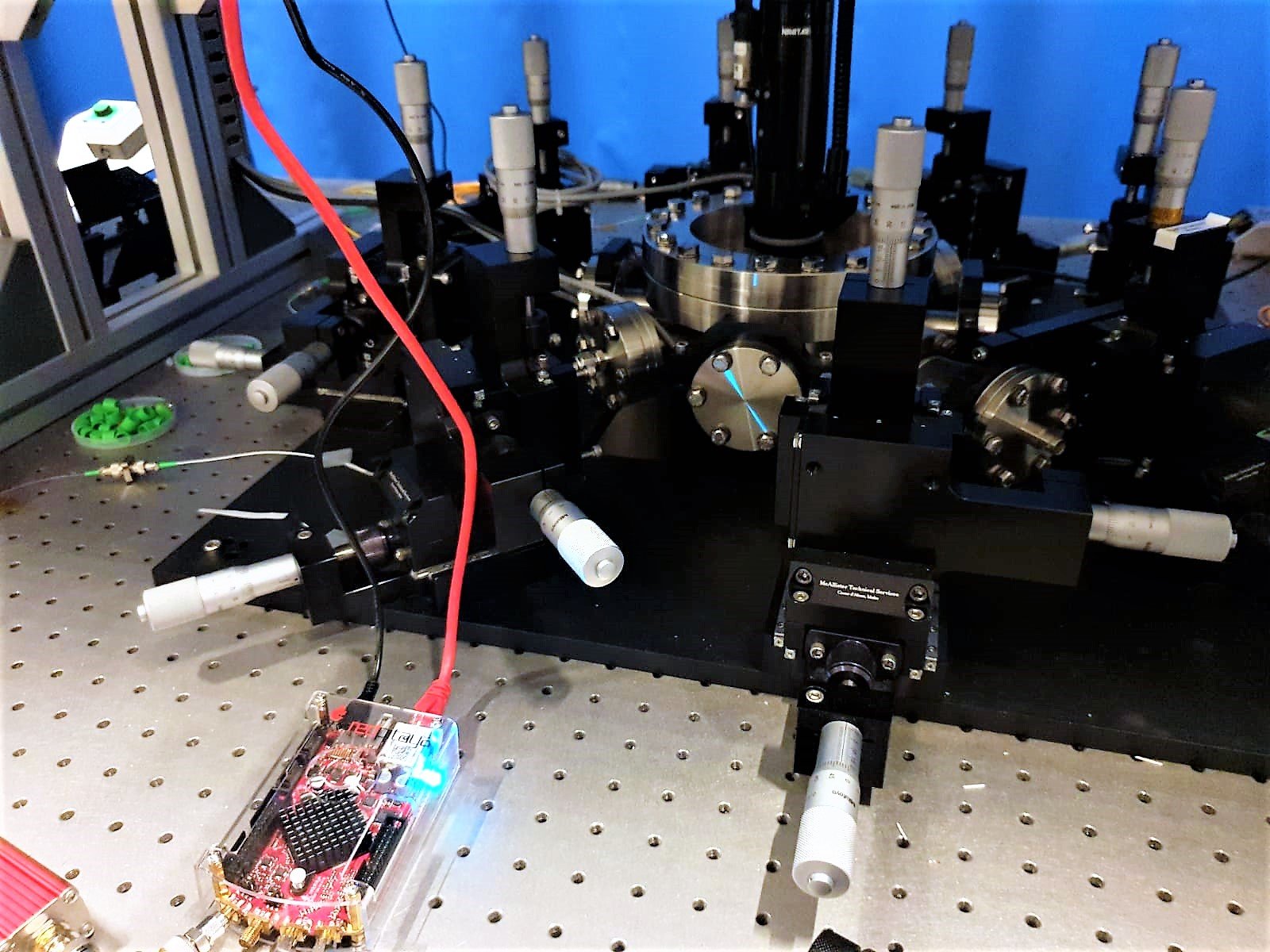 Quantum technology is clearly the way to go when you’re looking for faster, smaller and more precise high-tech solutions. Unfortunately, the extremely small size of these systems...

Many low cost SDR platforms are now available on the market, such as HackRF One [1], Adalm Pluto [2], and the USRP product line [3], to name only a few. What these platforms have...