Tomographic imaging modalities, such as magnetic resonance imaging (MRI) or computed tomography (CT), have become a central part of the clinical routine and are vital for the diagnosis of diseases and health problems. The scanners for these techniques are complex distributed systems, that use physical effects to produce an image from the inside of a patient. The imaging processes themselves require complex sequences that use synchronous multi-channel signal generation and reception.

Magnetic Particle Imaging is a new tracer based imaging modality, where the concentration of pre-administered tracers within the bloodstream is determined. The tracer material consists of super paramagnetic iron-oxide nano particles that are constantly remagnetized in an alternating magnetic field. Due to the nonlinear relationship between the particle magnetization and the exciting field, harmonics of the exciting fundamental wave are generated by the tracer. These harmonics can be measured and used to infer the tracer concentration. Even other physical quantities, such as temperature or viscosity of the tracer and therefore its surrounding material, can be determined. An example for potential applications for MPI is the visualization of blood flow for the diagnosis of artery diseases or functional brain imaging.

One of the major goals of current MPI research is upscaling the technology onto the human scale. The Institute for Biomedical Imaging at the University Medical Center Hamburg-Eppendorf (UKE) and the Hamburg University of Technology (TUHH) works on these goals in various algorithmic and experimental research projects. Together with their open software stack (RedPitayaDAQServer), they use the STEMlab 125-14 to implement a scalable and flexible signal generation and acquisition system that is used in their research.

One project is the development of a human-sized magnetic particle imaging scanner for brain applications. During measurements, this scanner applies two different magnetic fields: a gradient field (called “selection” and “focus” field, SF) and a time-varying field (called “drive” field, DF). For these fields, the respective control signals must be sent to the amplifiers that supply the field-generating coils. Additionally, the scanner also records the particle and feedback signals in parallel. 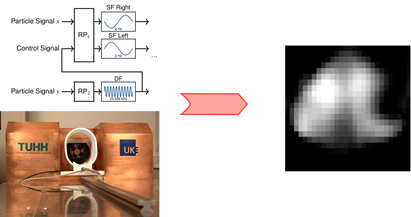 As shown in Figure 1, the scanner uses multiple Red Pitaya devices at the same time to generate and acquire the necessary signals. The devices have been modified similarly to the X-Channel System (https://redpitaya.com/product/stemlab-125-14-x-channel-system/) to allow for synchronization with a common clock and trigger. And their software itself is compatible with the Red Pitaya X-channel system

Another project, that uses STEMlab 125-14, is a power optimized magnetic field generator using iron coils, which is intended to be scaled up to the dimensions of the brain scanner. This system uses two arrays of nine iron coils (18 in total) to produce arbitrary magnetic fields between the arrays. The generator can be seen in Figure 2.

Each of the coils is driven with its own individual current based on the output signal from a cluster of nine STEMlab 125-14. This generator will produce the selection and focus fields for the brain scanner. However, with this setup, experiments on magnetic manipulation of microrobots or imaging with specially shaped magnetic fields are also possible. The cluster is mounted on modular printed circuit boards, as shown in Figure 3, which also act as a power supply and distributer for the signals necessary for synchronization.

Figure 3: Printed circuit board that acts as a mount, power supply, and trigger distributor for five of the nine STEMlab 125-14 devices of the magnetic field generator.

Overall these projects show the capabilities of combining several Red Pitaya devices and how they can be used in projects that require a larger number of in- and output channels.

More information can be found in the following resources: 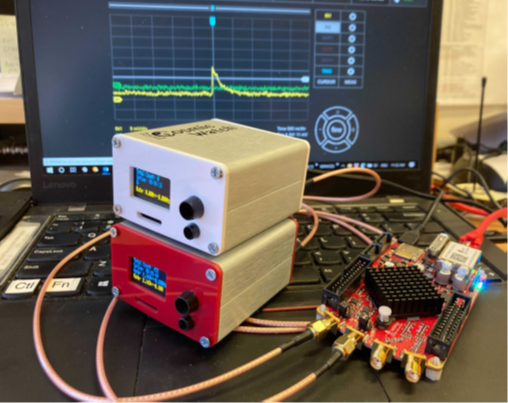 We often and rightfully state that education is part of Red Pitaya´s DNA. That´s no surprise, given the perfect match between the wide range of technical possibilities the units... 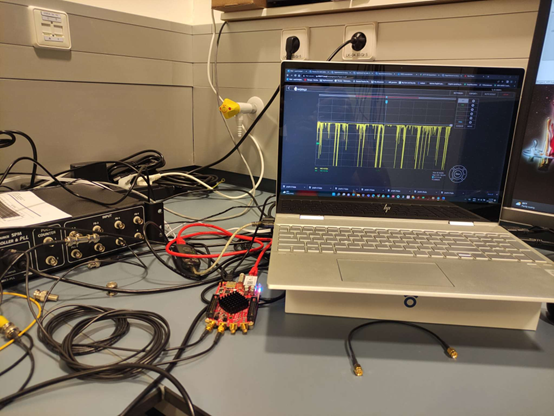 I am Saeid Behjati, a PhD student at Leiden University developing a new Scanning Tunnelling Microscope (STM) as a part of my PhD program. I have developed mechanical parts as well...