The Red Pitaya and PureSignal 2.0

The Red Pitaya is an open-source hardware and software product based on a reprogrammable logic chip, a field-programmable gate array (FPGA). It can replace many expensive laboratory measurement and control instruments by loading free-of-charge software applications from the ‘Bazaar’ link on the Red Pitaya website. The source code is published to encourage people to develop new applications and share their results with the community. Figure 1 shows the Red Pitaya enclosure – the dooverlackie (a little larger than a matchbox) – and the PCB inside it. Pavel Demin, IT Engineer at Université Catholique de Louvain [3], developed an SDR as a hobby project, using the Red Pitaya and open-source software [4]. The application that I used for the test was the “SDR Transceiver compatible with HPSDR”. The digital receiver and transmitter functions run directly on the field-programmable gate array, which transmits digital baseband signals over Ethernet by emulating a Hermes SDR using the ‘Metis’ protocol [5]. This SDR transceiver uses the two receiver inputs and one of the transmitter outputs for the functionality described in this article. The second receiver input provides the feedback path for the PureSignal functionality, as shown in Figure 2 (later).

Amplifiers used for single sideband (SSB) transmission are often assumed to be linear – If 0.5 W input gives 5 W output, then we would expect that a 1 W input would give 10 W output. Unfortunately, this is not the case and most real-world amplifiers have some non-linearity. The impact of this is the generation of inter-modulation distortion (IMD) resulting in signal distortion within the desired transmission passband and ‘splatter’ that raises the noise level on either side of the transmission thus polluting the bands on which it operates. Fortunately, digital pre-distortion is a technique that improves the linearity of amplifiers, reducing the IMD levels that they generate by ‘pre-distorting’ the input signal in the opposite direction to the distortion generated by the amplifier. The end result is a cleaner, more linear amplifier response. The Red Pitaya and PowerSDR have the processing power to apply these corrections in real-time. Dr. Warren C. Pratt, NR0V, developed the technique and presented it at the German Friedrichshafen HamFest in 2014 [6]. This digital pre-distortion is applied as a separate routine in the PowerSDR OpenHPSDR mRX PS software. The “PS” at the end of the application’s name identifies that PureSignal is included in the application. 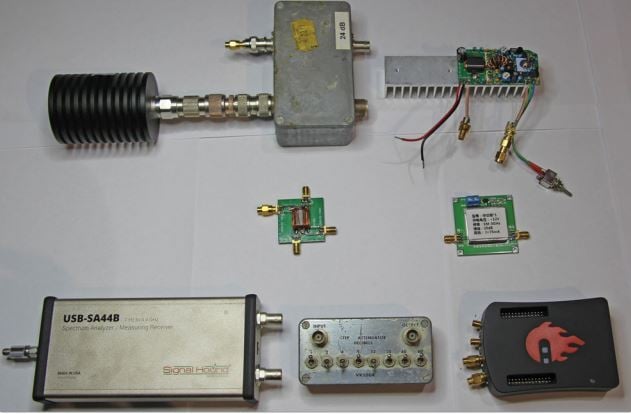 All tests were conducted using the PowerSDR OpenHPSDR mRX PS v3.4.9 (released 21 March 2018) software with PureSignal Version 2.0. Pavel’s software loaded onto the Red Pitaya was red-pitaya-alpine-3.12-armv7-20200628.
All tests were conducted using the TUN (tune) button for single tones and the built-in Two-Tone Test from PowerSDR OpenHPSDR mRX PS, Setup > HPSDR Setup > Tests. The Two-Tone Test uses the frequencies of 700 Hz and 1900 Hz (not harmonically related); the test levels are 6 dB down from the single-tone level so as not to exceed the peak voltage excursion limits of the amplifier. A number of tests were conducted to establish the baseline performance of the Red Pitaya and the 10 Watt amplifier, both with and without the application of PureSignal. The SDR’s output frequency was set to a representative frequency for each band. The 10 W amplifier was sourced from QRP Labs [7] and built by me from a kit set. This amplifier was driven by a smaller 20 dB gain amplifier with a +20 dBm maximum output level to provide a sufficient drive signal for the 10 W amplifier. The test configuration is shown in Figure 2 (plus Photo A) and all tests were done into a 50 ohm dummy load. Note that the single-tone levels are set to 16 dBm from the 24 dB coupler, equivalent to -4 dBm from the 20 dB coupler into the spectrum analyzer. This corresponds to 10 W at the output of the linear amplifier. The test results are shown in Table 1, where the IMD improvement is typically more than 30 dB for most of the HF bands and, in particular, over 40 dB for the 80, 40, and 30-meter bands. The single tone level shown in Table 1 was used to establish a fixed power level for all tests. However, it is noted that on the 6-m band there is insufficient gain in the amplifiers to meet this level. Note that the IMD levels shown in Table 1 are relative to the two-tone level and not the single-tone level. Figure 3 shows the IMD level on the 20-m band with PureSignal turned off, while Figure 4 shows the level with PureSignal turned on. A delta marker <3> in each figure compares the 3rd order IMD with the level of the two tones, which is referenced by. Similar results for the other bands are found, as shown in Table 1. It can be seen in Figure 2 that the feedback level provided to the Red Pitaya was set by an external step attenuator and it was found that this attenuation level stayed fixed at 18 dB, except for the 6-m band where the actual output level was reduced and consequently the attenuation level had to be reduced. 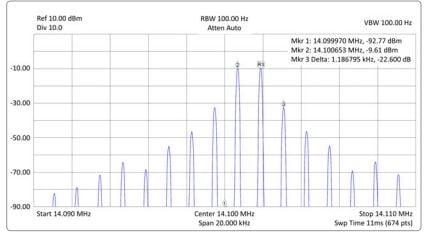 This article has presented an experimental evaluation of the benefits that can be obtained through the application of digital pre-distortion to a linear amplifier with a suitable transceiver, which, in this case, was a Red Pitaya SDR.
The reduction of the third-order IMD products of typically greater than 30 dB improves the purity of the output signal significantly, reducing splatter in adjacent parts of the band being used. While amplifiers rated at 10 W output were used here, digital pre-distortion can be applied to much larger amplifiers too, so long as the coupling unit providing the feedback to the Red Pitaya can be configured to provide the feedback at the required level. This could enable less linear, but more efficient, amplifiers to be used by amateurs while meeting unwanted emission
limits. My thanks to Dr. David Ingram VK4TDI for reviewing this article before submission and providing the
photographs that are used here.

Red Pitaya was used in a project: Development of a laser spectroscopy test bench for quantum cascade lasers.

Laboratory material research is traditionally linked to bulky, high-precision equipment for precise analysis. Unfortunately, it is virtually impossible to take these devices into...